On July 26th 2021 the Colchic Rainforests and Wetlands in Georgia are officially inscripted on the UNESCO World Heritage List. The Succow Foundation and is especially pleased about this success, since this is Georgia’s first Natural World Heritage site. Together with WWF the Succow Foundation has supported the Georgian government in the nomination process over several years. Being part of the World Natural Heritage shall now improve reputation and nature conservation within the region.

The nomination of the Colchic Rainforests and PeatlandsWetlands for the UNESCO World Heritage was based on exceptional values in biodiversity and richness in endemic and relict species of flora and fauna. Also, it stretches over a complete altitudinal series of the most typical Colchic ecosystems from the Black Sea to the alpine zone. The site includes seven areas of rainforests, peatlands and mires in the Colchis, a distinct ecological region in Eurasia. Within an 80 km long corridor along the warm-temperate and extremely humid (annual precipitation up to 4,500 mm) eastern coast of the Black Sea, it harbours numerous species of plants and animals adapted to this climate, including the Critically Endangered Colchic sturgeon (Acipenser colchicus) as well as 1,100 species of plants, some 500 species of vertebrates, and many invertebrates.
The property holds the oldest broad-leaved forests – together with the Hyrcanian forests of Iran and Azerbaijan in western Eurasia. These are relict forests, which have survived the glacial cycles of the ice ages, and are at the same time the most humid nemoral broad-leaved rainforests globally.
The project was funded by the German Federal Environment Ministry’s Advisory Assistance Programme (AAP) for environmental protection in the countries of Central and Eastern Europe, the Caucasus and Central Asia and other countries neighbouring the European Union of the German Environment Agency (UBA). It was supervised by the Federal Agency for Nature Conservation (BfN). 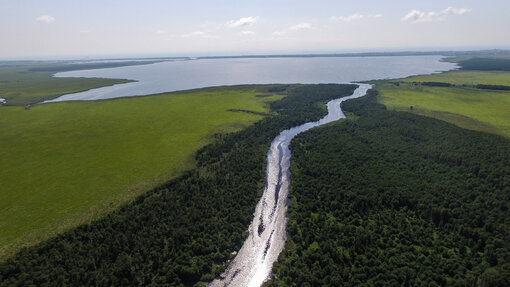