What scientific cooperation achieves – A month ago, the first digital herbarium specimens from the National Herbarium of Uzbekistan (TASH) were transferred to the Global Biodiversity Information Facility (GBIF). The GBIF is the world's most comprehensive biodiversity database with over 2 billion entries, and is available to scientists around the world under the creative commons licence.

The National Herbarium of Uzbekistan (TASH) at the Institute of Botany of the Academy of Sciences of Uzbekistan in Tashkent houses the largest collection of herbarium specimens in Central Asia. It is among the 100 largest herbaria in the world. The collection contains more than 1.5 million plant specimens collected over the past 180 years from all regions of Central Asia. These include many type specimens of outstanding value, as the description and nomenclature of organisms is based on such specimens.

The digitisation of the herbarium specimens of the TASH takes place within the framework of the project "Virtual Flora of Central Asia - CAViF". Scientists from the Institute of Botany of the Academy of Sciences of Uzbekistan, the University of Greifswald and the Michael Succow Foundation (Greifswald) worked closely together on this project. Herbaria are archives of dried and meticulously documented plants. They form the archive of the flora of a region or a country and thus offer every interested or professionally involved person the possibility to inform themselves about the current or past distribution of plants down to the smallest morphological detail. They are thus comparable to ice cores from the Arctic or spectral images of the universe.

It is crucial that these unique archives are in a good state of preservation and are also available digitally and online for accessibility in a globally networked scientific community. In this way, the data can be linked to further biodiversity and environmental data and contribute to new knowledge.

The online version of the digital herbarium TASH and the Virtual Guide to the Flora of Uzbekistan have been created since 2018 via the project "Virtual Flora of Central Asia - CAViF" and implemented as part of the funding programme "Pilot Measures for Partnerships in Science, Research and Education with the Countries of Central Asia and the South Caucasus", which is funded by the German Federal Ministry of Education and Research (BMBF).

The new occurrence dataset: Type Collection of the National Herbarium of Uzbekistan

Virtual Guide to the Flora of Uzbekistan

Care is already required in the preparation of good herbarium specimens. The plants are placed in newspapers for pressing and separated in clip folders. At the same time, data is entered on the computer. © J. Wunderlich/ Michael Succow Foundation 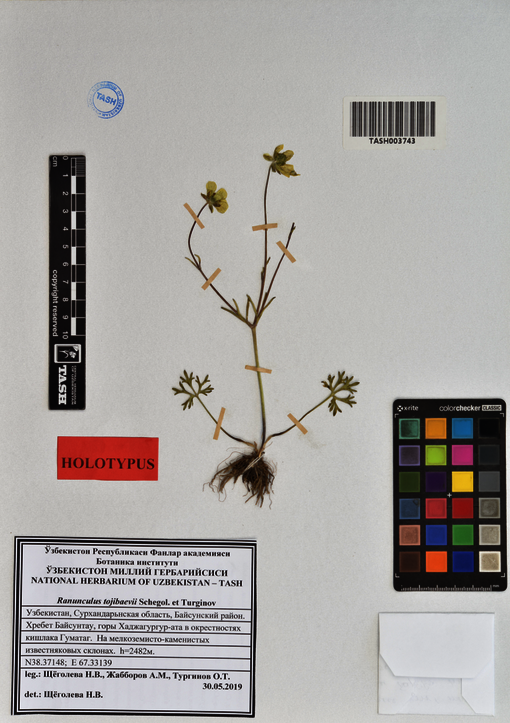 The digitised herbarium specimens provide comprehensive information, here on a new species of Ranunculus from Uzbekistan. Below the plant is a legend with the name, place of discovery and finder of the plant. The colour chart serves to calibrate the colour value and the ruler for sizing. The white envelope contains plant seeds. The barcode with an identifier in the upper section guarantees that the document can be clearly assigned and found. The great thing about the documentation, however, is that it has been digitised, photographed and processed in such a way that you can zoom in quickly and closely in the online herbarium without long loading times to see the smallest details of the plant. © TASH