16. September 2021, Greifswald / Tashkent: Since yesterday, the riparian forest ecosystem in the lower reaches of Amudarya river in Uzbekistan's Karakalpak region officially belongs to the UNESCO World Network of Biosphere Reserves. Good conditions for a better compatibility of nature conservation and land use. Together with the Gesellschaft für internationale Zusammenarbeit (GIZ), the State committee of the Republic of Uzbekistan on ecology and environmental protection and NGO KRASS, the Michael Succow Foundation drafted the nomination document and accompanied the initiation of approaches for ecosystem-based Adaptation and ecosystem conservation in the lower reaches of Amudarya river.

The last remaining riparian forests in the middle of the huge cold winter deserts - they exist along the two great lifelines, the inland draining streams of Central Asia. Locally they are called "tugai". They are refuges of endemic but also highly endangered species, such as the iconic Bukhara deer, Amudarya sturgeon or Khiva pheasant.

In the past century, the tugai forests of Central Asia have shrunk by a dramatic 90%. The reasons are the decline in seasonal water availability due to dams and irrigation infrastructure, intensive land use, especially cotton cultivation, water extraction from the river ecosystem and firewood extraction from the riparian forests. These human interventions led to massive soil salinisation, substantial forest degradation and a reduced natural flooding regime. The dry up of the Aral Sea, of which the Amudarya is the southern tributary, became a global symbol of the ecological disaster in Karakalpakstan.

With the current recognition of the area as a UNESCO Biosphere Reserve, the international community acknowledges the efforts of the Uzbek government in this region, which is facing multiple ecological challenges, including climate change, to take measures that focus on nature-based solutions (NbS), ecosystem-based adaptation (EbA) and sustainable land use development. It is a courageous decision and a glimmer of hope that we can learn from past mistakes for the future through forward-looking, wise management that does not exceed the regenerative capacity of ecosystems.

The Michael Succow Foundation is implementing the project together with the Deutsche Gesellschaft für Internationale Zusammenarbeit (GIZ) in Uzbekistan. The project was part of the International Climate Initiative (IKI). The Federal Ministry for the Environment, Nature Conservation and Nuclear Safety (BMU) is funding the initiative based on a resolution of the German Bundestag. 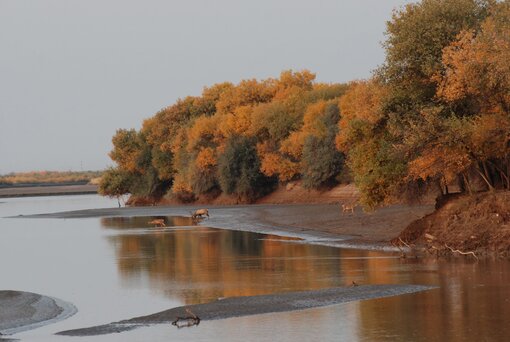