The Jigsaw of the unique Hyrcanian Forests is getting finally completed one after another ensuing a prolonged effort.

The Jigsaw of the unique Hyrcanian Forests is getting finally completed one after another ensuing a prolonged effort. The Hyrcanian Forests form a green arc of deciduous mixed broad-leaved forests stretching across some 900 kilometres along the Caspian Sea, from the Talish Mountains in the Republic of Azerbaijan across the Alborz Mountains all the way east to Golestan Province in the Islamic Republic of Iran.

The serial World Heritage nomination of carefully selected representations of the Hyrcanian Forests located in the Islamic Republic of Iran was inscribed on the occasion of the 43rd session of World Heritage Committee in Baku, Azerbaijan, according to criterion (ix). The serial property encompasses 15 component parts representing key examples of the various stages and features of natural Hyrcanian forest ecosystems. While most of the ecological particularities characterizing the Hyrcanian Forests are represented in the inscribed property, there was considerable potential for further serial extension to include additional areas of global conservation value in both the Republic of Azerbaijan and the Islamic Republic of Iran.

Following the inscription of the Hyrcanian Forests in Iran in 2019, a project was established bringing together the two States Parties in order to ensure coordinated follow-up. Three component parts situated within Hirkan National Park of Azerbaijan and two component parts within Dizmar Protected Area in north-west of Iran are proposed additionally through this project. All add value to the inscribed property in terms of inscription criteria (ix) and (x).

The irreplaceable forest relics tell a fascinating story of the uninterrupted and ongoing evolution of temperate deciduous forests over some 25 million years from the Tertiary period to this day, a fascinating story of continuity and survival, persistence and flexibility, adaptation and diversification. The desired transnational inscription will consolidate the envisaged cooperation between the two States Parties with the eventual ambition of conserving a wonderful forest. It is also about collaboration. Both needed more than ever in our world.

This project was funded by the German Federal Environment Ministry’s Advisory Assistance Programme (AAP) for environmental protection in the countries of Central and Eastern Europe, the Caucasus and Central Asia and other countries neighbouring the European Union. It was supervised by the Federal Agency for Nature Conservation (BfN) and the German Environment Agency (UBA). 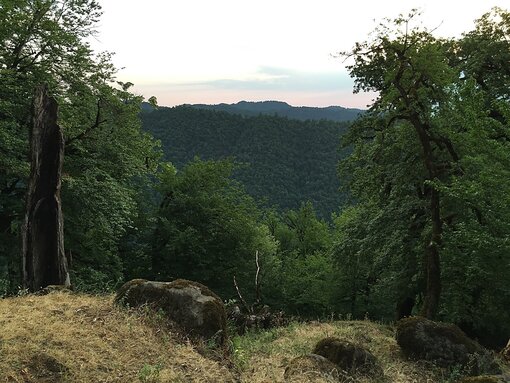