What influence does the type of agricultural management have on the humus content of the fertile black soils (chernozems) of Ukraine? How might humus contents change under different climate change scenarios?

These questions were answered by the Ukrainian-German project team at the online event in December 2021 to mark the end of the project "Carbon stocks of Ukrainian Chernozems as a function of Land Use and Climate change and their significance for GHG mitigation" and they informed about the results of the study.

The almost 30 participants, among them the Vice Minister of the Ministry of Environment and Natural Resources Protection of Ukraine, Iryna Stavchuk, as well as representatives of the project sponsors and the project coordination, namely the German Federal Ministry for the Environment, Nature Conservation and Nuclear Safety (BMU) and the German Society for International Cooperation (GIZ), showed great interest in the results and will support their dissemination.

The study showed that management measures have a significant effect on the level of humus storage.

The highest humus contents are found in soils where humus-amplifying agronomic measures are applied, such as a multi-unit crop rotation with more than seven different crops including the cultivation of legumes, organic fertilisation with e. g. compost and reduced tillage intensity (no ploughing).

However, natural factors such as a higher clay and silt content also have a positive effect on the humus content, as it is better protected against degradation in such soils.

The modelling shows that in the case of no change in Ukraine's climate policy (business-as-usual scenario) and the assumption of ssp3-7.0 (Figure 1), humus contents would decrease by 4 % by 2030 - a warning to decision-makers to tighten climate policy! In the case of a green/sustainable growth scenario, humus stocks would remain constant (target of C-neutrality by 2060).

This project is part of the overarching GIZ programme "Capacity Development for Climate Policy in the Countries of South Eastern Europe, Eastern Europe, South Caucasus and Central Asia, Phase III". This project is part of the International Climate Initiative (ICI). The Federal Ministry for the Environment, Nature Conservation and Nuclear Safety (BMU) supports this initiative based on a resolution of the German Bundestag. 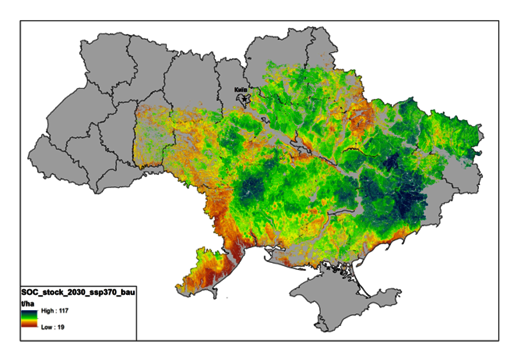 Modelled distribution of carbon stocks of chornozem soils in Ukraine for 2030 for climate scenario ssp3-7.0 and a business-as-usual strategy. SOC is estimated in ca. 1870 Mt C. (Current SOC: 1943 Mt C) 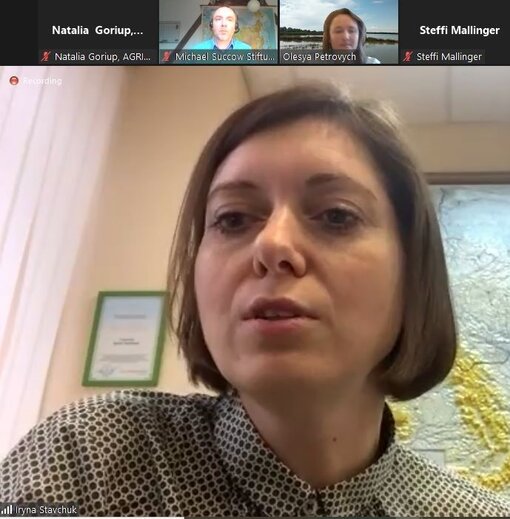 Deputy minister of environment of Ukraine, gives opening speech at the round table meeting
Cookie Einstellungen