With the rewildering of the first 13 Asiatic Wild Asses (Equus hemionus kulan) from the breeding center Ecocenter Jeyran to the in 2016 established Complex Landscape Reserve Saigachy (IUCN 1b) Uzbekistan took an important step for the restoration of wilderness areas towards the achievement of Aichi Targets.

As a next step further resettlement of up to 175 individuals into the newly established desert protected areas are planned. Also the Southern Ustyurt National Park (IUCN II) will receive Asiatic Wild Assess from captivity. The translocation is done based on the Resolution No. 317-A of the Cabinet of Ministers of the Republic of Uzbekistan.

Until the end of the 19th century, Asiatic Wild Asses were common in Ustyurt, but in the last century they completely disappeared from the plateau, while the Michael Succow Foundation and a team of uzbek scientists could rediscover some few individuals in 2012 and the following years. The Southern Ustyrt National Park was established in 2020 with support of the CADI project.

The Foundation contributed with monitoring data and scientific advise. Also in the Saigachy Reserve MSF provided monitoring guidelines and training to the reserves‘ staff.

CADI is part of the International Climate Initiative (IKI). The Federal Ministry for the Environment, Nature Conservation and Nuclear Safety (BMU) supports this initiative on the basis of a decision adopted by the German Bundestag. 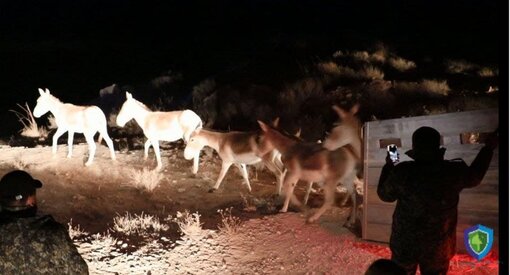